Information on Kosi Bay and the Surrounding Area

Kosi Bay is a series of four interlinked lakes in the Maputuland area of KwaZulu-Natal, South Africa.The lakes form part of the iSimangaliso Wetland Park, a UNESCO World Heritage Site. The Kosi Bay estuary is only 2 kilometres from the Mozambique border. It is one of the quietest beaches in South Africa and the Kosi River Mouth is known as "the aquarium" because of the clarity of the water and the abundance of fish species.

Fauna and Flora in Kosi Bay

Bird species in the area include the Palm-nut Vulture, Pel's Fishing Owl, White-backed Night-heron, and kingfishers. Duiker, hippopotamus, crocodiles and Bull sharks are also present, and loggerhead and leatherback sea turtles lay their eggs on the beach. The Kosi Palm has the largest leaf of any plant in the plant kingdom. Endemic species include the Kosi cycad, Kosi Fern and cycads. It is one of very few places on Earth where five different species of Mangrove trees are found in one area. Kosi Bay is particularly famous for the traditional fish traps built to trap fish moving in and out of the estuary with the tide.

The Palm Tree Lodge has always encouraged the use of the Gillies (local guides) to show visitors around. Gillies are often hired for assisting during a day of fishing, whether it is to collect bait, advise on what to use and where to fish, carrying of gear over the dunes if fishing on the beach, and also cleaning of the fish etc. All of this and payment must be arranged directly with the Gillie himself, cutting out any middle man! 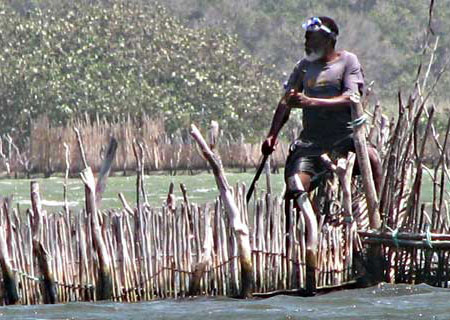 The Palm Tree Lodge unlike most other resorts makes use of locals to provide services to the guests in an effort to uplift the community as well as to create a spirit of ownership to the local population. From Guided tours, Transfers to and from various locations around the Kosi Bay Area and even Cultural Tours through the Wetland, these locals are encouraged to operate and execute their own business which assists the guests at the lodge in the form of open bargaining and also doing away with the middle man in such cases.

The local people operate excursions such as: Fishing Guides, Local Attraction Tours, Game Viewing trips to the nearby Thembe Elephant Park, Turtle Tours during the months November to March,Bird Watching all around the Natural Parks and forests, Transfers to the local beaches which are only accessible by 4x4 vehicles.

We strongly recommend the use of 4x4 vehicles on our roads as the sand is often very thick in places. Getting to the Mouth, Black Rock and other beaches, including driving around in Mozambique can best be done with a 4x4 vehicle.

Quad Bikes are absolutely not allowed as they are off road vehicles (not licensed to be on a public road). All the roads in our area, leading to the lakes, the lodges and private dwellings are accessed by the public and are therefore considered a public road.

The Palm Tree Lodge and all the resorts in the area are in a Malaria area and although the health department does spray regularly the Management of Palm Tree Lodge request that all precautions be taken in the form of tablets and mosquito repellent whilst visiting the region.
We do take all the precautions to ensure your health but we feel that prevention is better than cure. 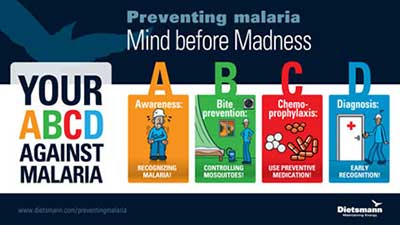 Kosi Bay is a misnomer as there is no actual "Bay", rather an intricate system of rivers, lakes, an estuary and mouth, running parallel to the beach, which is considered one of the most pristine estuarine lake systems on the continent. The area comprises four inter-linked lakes that are fed by the Siyadla and Nswamanzi Rivers from the south and west respectively, starting at our freshwater lake, "aManzamnyama" (Black Water) also known as Fourth Lake, which is home to many hippos and crocodiles. aManzamnyama drains into the largest lake in the system, Lake Nhlanga (Third Lake) via a short broad channel.

Third Lake drains into Lake Mpugwini (Second Lake) via a long winding natural channel, where boats are required to go "Dead Slow" not only to help preserve the sensitive eco-system, but to encourage guests to view the fish and variety of bird species found in the channel. In Second Lake the fish traps start lining the broad channel toward KuSifungwe/ Makhawulani Lake, also known as First Lake, which in-turn drains into the estuary, and from the Estuary into the Mouth and out to sea. At high-tide saltwater is washed into the mouth, which spreads out into the lakes in varying concentrations. The mouth is a favourite snorkelling spot for everyone, boasting a variety of tropical fish including the Moray Eel and Stone Fish. Just watch the tide and drift along as you enjoy the breathtaking views of the fish in the "aquarium" below.

The fascinating semi circular patterns of the fishing kraals or fish traps ("Utshwayelo") along first lake and the estuary toward the Mouth have been part of the local landscape for more than 700 years, passed down through the generations of tribal existence from father to son. These remarkable and ecologically friendly fish traps are made and tendered by the resourceful Tonga people, using local wood bound together with raffia and reeds, both growing in abundance around the lakes and along the channel respectively. The traps are cleverly designed and placed to allow the fish to swim toward the banks to feed. On their return with the outgoing tide, the fish then swim alongside the reed "wall" of the trap which leads them toward the circular trap itself, where they remain trapped until the trap owner spears the unlucky fish to take home.

The entire Kosi Bay area, falls under the protected St Lucia Wetlands and is part of a World Heritage Site. In order to preserve our remarkable area and keep it as striking and unspoilt for generations to come we must stress the importance of different vehicles using our roads. Quad Bikes are absolutely not allowed as they are off road vehicles (not licensed to be on a public road). All the roads in our area, leading to the lakes, the lodges and private dwellings are accessed by the public and are therefore considered a public road.

Most of the roads are pure sand and have become very rough due to the dry conditions, while others are filled with building rubble or gravel by the community and surrounding lodges in order to provide easier access for most 2 wheel drive vehicles. Cars that are low on the ground are not recommended, as the 2 wheel tracks on the sand roads often leave a centre bump in the road that can hurt the underside your vehicle. We strongly recommend the use of 4x4 vehicles on our roads as the sand is often very thick in places. Getting to the Mouth, Black Rock and other beaches, including driving around in Mozambique can best be done with a 4x4 vehicle.